Since we are discussing characters, let’s talk about the most important tool an author can utilize when dealing with character development…

Verisimilitude, defined as the appearance of being true or real, is the author’s ability to make the character seem real. “How do I make my characters seem real,” you might ask. Your character should seem just as real to you as your best friend. You should know them like you know yourself. Make them unique, give them quirks, flaws, and traits. Give them jobs, families, and friends. To truly convey your character in a way that seems real, you must understand who that character is. Deborah has been kind enough to cover your crucial character types and some of the traits that make your characters stand out from the rest so, let’s dig a little deeper into the character’s and how detailing their profession can add considerable depth to a character.

Professions: In literature as a whole, people love reading about work, especially if it’s a job that they have been exposed to. This is just as important to a fantasy novel. You may not be able to write about jobs that are directly identifiable with the reader. Let’s face it unless it’s an Urban Fantasy, your Protagonist won’t be working behind the counter of a local McDonald’s.

However, you can still add a sense of realism to the professions included in your fantasy. Do some research into jobs that were held hundreds of years ago. Compare what you know about fantasy to what they were doing in the real world. We all know what a blacksmith is but, do you know what a quartermaster is? Do you know about the smithing process? The heat treat and the quench of the blade are crucial to the hardness, and its ability to keep an edge. It’s adding small detail like this into your work that really makes your story stand out. It also gives you credibility with the reader. Trust me, if you.re talking about a profession that actually exists in the real world you want to have your facts straight. Being an author means opening yourself to constant scrutiny by your peers and the public. They will be all too happy to point out any mistakes you have in your details. This is not meant to discourage you but, to help you add the sense of realism that readers are looking for when they want to totally immerse themselves in your world.

What about professions that don’t exist in the real world? No, your protagonist won’t be working the drive-thru but, they might be an apprentice to a wizard or a master of potions. They could be a demon hunter, or maybe they are something we’ve never seen before. Regardless of the profession, all professions have rules and a lifestyle that comes with it. Compare your profession to real-world professions and find similarities. Find common complaints that your character might have about the work. Maybe your character absolutely loves his job but, doesn’t make a great living doing it. Put yourself in their shoes and see what they would be doing on a day to day basis. Would a sorcerer’s apprentice just hold things and watch his master perform magic? No! He would have to have detailed knowledge of the spell components his master needs and the properties of each. He would be charged with keeping the wizard’s study clean and organized. He would file all the books and scrolls for his master as well as run errands as needed. Again, it’s the small details that you add that make a profound impact on the immersive nature of your world.

Can you overdo it? Of course, you can! You don’t want to add small details to every little thing that your reader encounters in your book, or you’ll end up with a 2,000-page tome with step by step instructions on everything from blacksmithing to knitting. Details are important but, it’s the finesse that they are delivered with that make an author stand out. Your characters, your world is completely your own. You should know as much as you possibly can about them to deliver a real experience of suspended disbelief. 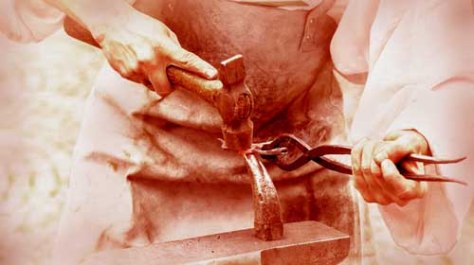 Since Adam Johnson was a child, he had an insatiable craving for a great story. Whether movies, comic books, TV, he was hooked on the story. An invitation to play Dungeons and Dragons led Adam to write a backstory of one of the characters, and the desire to write fantasy was born. When not writing high fantasy, Adam is restaurant management and a tattoo artist. He also serves as an administrator for the Facebook group, “Writer’s Unite!,” with 41,000 + members from around the world.