Humans are wonderful multi-taskers. We can walk while we talk, eat while we read, and even plan out our upcoming work-in-progress while we perform our daily chores. In some cases, we can even do more than two things at once. Aren’t we breathing while we do these things? Our faces are likely holding an expression that reflects our mood. Our hearts are beating. These are things that are almost always done (unless you’re writing about vampires and there is no heartbeat or breath to take) in conjunction with other things. However, there are some things that simply cannot be done at the same time as other things. You can’t walk while you skip, you can’t yell while you gulp down water, and you certainly can’t stand up while you cross a room. That is why it is harmful to depend on -ING verbs too much when writing. 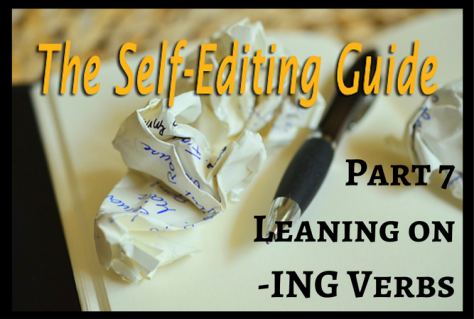 An -ING verb used after a comma usually indicates that something is happening at the same time as another thing.

I stood up, walking across the room and opening the door.

Wait, what? The sentence is saying that the -ING verbs walking and opening are happening at the same time the first part of the sentence is happening. So the author is saying the character stood up while walking across the room and opening the door. Is that plausible? No. But you wouldn’t believe how often I come across it both in books I’m editing and books I’m reviewing.

Using -ING is widely believed to soften the narrative a bit, to add a touch of poetic prose to the story. Many authors strive to have a healthy dose of poetic prose in their story, so this mistake is often made with good intentions. However, to engage your readers, your story must have a touch of reality as well. If they’re rolling their eyes, their next step is throwing your book across the room. And in this case, they may even roll their eyes while chucking your book—because that’s somewhat logical if they don’t give a hoot what it knocks over in the process.

Instead, only utilize -ING verbs to indicate an action is happening at the same time as another if it’s something the character can actually accomplish. Otherwise, you can use the phrase and then to connect the two fragments if you don’t want to leave them as two choppy sentences.

I stood up, and then I walked across the room and opened the door.

In this situation, the character has now accomplished three tasks and no one scrunched their eyebrows or imagined the character doing all three things at once. If you really want to keep the -ING verbs, you can even try this:

I stood up before walking across the room and opening the door.

No commas, and everything works. This is completely okay. However, if you are writing an action scene where your character is in a dire situation, you can set the pace by removing -ING and keeping the text simple, direct, and to the point. This may lose you a few prose points, but if it’s a serious situation, your readers probably aren’t worried about imagery and they likely won’t demand a soft pattern of words. They want to know what happens to the character. They want to be engrossed in the story. Any accidental slowing-down of the narrative during a fast-paced action scene can throw off the pace and lose the effect—as I’ve mentioned in previous articles. Save the soft, flowy narrative for the moments after the action. That gives your readers a breather to recoop after what you put them through.

Most times, I get caught up in writing and I end up finding that I slipped a few illogical ones in there without realizing. It’s a nasty habit I try and fail to break. I, too, want soft, flowy prose in my stories. However, when self-editing, I scan the text for those -ING verbs and I reread the sentence without them. If it sounds bolder and more direct without them, then that’s the way I want to go and I rework the sentence until walking becomes walked, opening becomes opened, and so on.

You won’t want to change every single -ING verb you find, and that’s okay. You also need a healthy dose of balance in your story. But you need to be mindful of this when editing so you can spot the phrases that don’t make sense and fix them. And don’t get discouraged if you find more than you expected. As Earnest Hemingway reminds us: 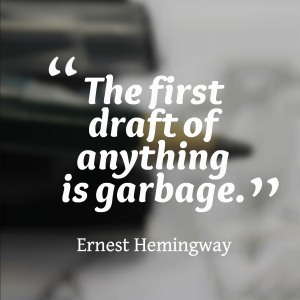 Jessica Victoria Fisette is the author of The Soul Reaper series, Fragments, and The Aldurian Chronicles. Her hobbies include discovering the benefits of natural medicine, wine tasting, and trying new recipes in the kitchen. She likes to unwind by typing out a scene or two in her latest obsession or indulging in a good book. Having been passionate about writing since she was a little girl, she is constantly coming up with new ideas for future stories and creating unique, strongwilled—albeit flawed—characters to overcome the difficult obstacles she places before them. Having spent all her life in rural Southeast Texas, she appreciates the tranquility of country living and hopes to implement such a love for nature into her beautiful, ever-so-curious little girl.

You can follow her by clicking the links below.