Prolific author Neil Gaiman was born and raised in England but moved to the United States in 1992, where he continues to reside outside Minneapolis. He is well known as a master storyteller working in a variety of mediums who mixes modern reality with the fantastic.

Gaiman began his career as a freelance journalist, writing for various British newspapers and magazines. He later moved into many other areas of writing, including comic books, screenplays, fiction, young adult novels, children’s books and nonfiction. Gaiman’s critically acclaimed comic book series The Sandman ran for 75 issues, from 1989 until 1996. The Sandman was later collected into a series of 10 graphic novels. In addition to creating The Sandman series, Gaiman has been called upon to reimagine other comic creators’ works, including The Eternals miniseries for Marvel Comics and an issue of Spawn for Image Comics. The Sandman series inspired a number of spin-off series by other writers as well as spin-offs by Gaiman, including Death: The High Cost of Living.

Gaiman’s fiction includes Neverwhere, which was originally conceived as a BBC television miniseries; Good Omens, a humorous novel about the apocalypse co-written with Terry Pratchett, who is known for his comic fantasy Discworld series; the short story collection Smoke and Mirrors: Short Fictions and Illusions; and American Gods, which garnered numerable awards including the Hugo, Nebula, Bram Stoker, SFX and Locus.

Please note: Image from the Internet… no source available. Credit to photographer. Bio from the Chicago Public Library Site. 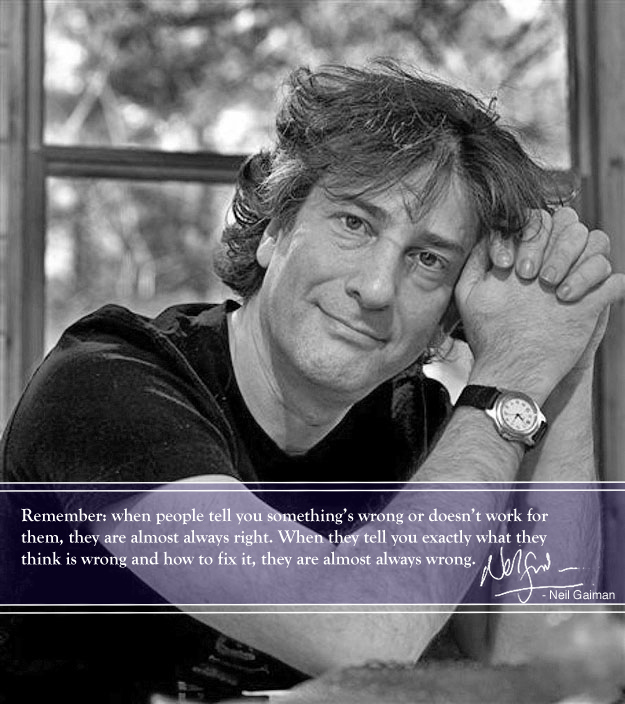 While this is very true for writers, it is also true in life.