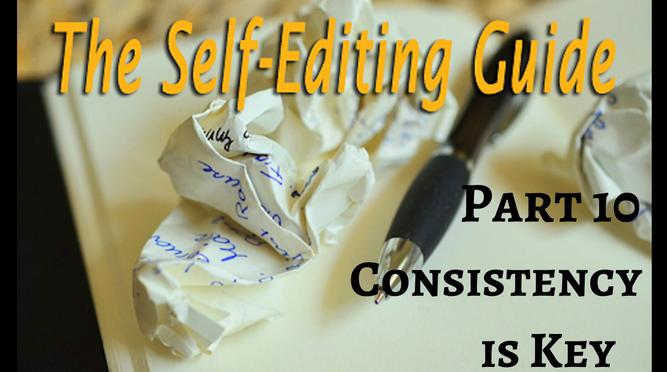 Consistency is Key. We’ve all heard this bit of sage advice at least once in our lives—probably more—but you might be wondering how it pertains to writing, or even self-editing, for that matter. Fortunately, these wise words can be applied to many aspects of life, including the art of creating worlds.

You want your readers to trust you. You want them to believe your words and accept your world while they are immersed in it. Otherwise, they may not experience it the way you hope they will. There has to be a touch of reality in your creation, regardless of the genre (even fantasy and science-fiction worlds will probably have some sort of explanation for why things work the way they do). One way to instill that believability, is by keeping your story consistent. Even the most cunning and intriguing lies start to unravel when the teller doesn’t keep to his original story. When people find holes in your story, they start to feel disconnected and duped.

Here are a few things to consider and look for when reading over your novel for consistency:

DESCRIPTION: When describing your world or its inhabitants, it’s important to keep notes so you can remember the details when referring to them again later. Your readers get a visual when reading about your character stumbling through a giant academy that was once an ancient castle, and if later you describe the structure, its materials, or even its history differently, you run the risk of putting your reader off and giving the impression that you threw the story together with little consideration for the mechanics of it all.

The same can be said for describing your character as having red hair and a button nose in one scene, and then later mentioning her raven black locks with a long, pointy nose in another without having any significant or bizarre events that would explain such a transformation. And as Deb, our fellow Writers Unite! admin, has said once or twice, no description is still a description. If you don’t describe your main character in the first scene or two, your reader will fill in the blanks in their heads. So it might do more harm than good to suddenly take the time in the middle of the story to describe him or her because the reader might disconnect from the character. They’d imagined him or her one way for hours, but now you’re telling them the character looks another way. Be consistent. Make descriptions early on and stick to them. That way, your reader can get lost in the world you’ve built for them.

CHARACTER PERSONALITY: Your characters’ personalities are part of what drives the story forward and creates tension for your readers. The characters should come alive in the readers’ minds and feel like a real person. One way to destroy any chance of that happening is to be inconsistent with their personalities. If one moment Jane Doe reacts peacefully and calm to a rather serious situation, and then in another she panics and has to be counseled, the readers are going to wonder why her personality has changed so much with no significant events to explain the transition. You can’t let plot decide how your characters react to something. You can’t decide that the female protagonist needs to be swooned by the male protagonist so she should act weak and needy when he’s around or available to swoop in and save her, but then have her be a total badass when he’s not—all because you want her to end up falling for him in the end. Life doesn’t work that way, and neither should your stories. Decide early on how your characters will handle tragedy, and stick to that. Whatever you throw their way, consider their reaction, depending on their level of tolerance, their limits on stress, their overall development, and then have them respond accordingly.

PLOT: The number one thing many readers will notice is a hole in your story. Plot holes are sometimes difficult to catch, and often times, I read books where the author left one or two and I’m forced to ignore it and continue reading if I want to enjoy the book. But I also know as a writer that they’ve probably combed through that book three or four times fixing the plot holes they did find, and this finished product is what we are left with after most were taken out.

Sadly, many readers aren’t so forgiving when they find a plot hole. Some even look for them for pure entertainment—and with good reason. Have you ever looked up your favorite television series online to see what others were saying about the latest episode and stumbled across a fresh list of plot holes just published on a fan site? And as you read through, did it change your opinion of the episode? Things you hadn’t even noticed were inconsistent, now stood out like neon signs. One rule the writers had set in stone in season one was now being trampled on in season three. That is how a reader feels when they become immersed in your world, and then your story starts to unravel and contradict itself. This is a result of poor planning on the writer’s part, and it can be avoided.

Even if you prefer to write without outlining your story first, which is perfectly acceptable, you need to at least write a short synopsis of how a few things work in your world. It can be a short story, it can be a paragraph of pure telling, it can be anything you want. But you need to organize the thoughts spinning around in your head before you can get it all out on paper. It takes most of us days, weeks, and even months to get it all written, and by then it isn’t so fresh in your mind. Some vital things may get lost by the time you get to that point if you don’t have something to refer to. And when you’re done writing your story, you need to comb through it with an editor’s eye, searching for any inconsistencies.

Event Dates, Times, Etc.: This may seem insignificant, but it is one of the little things that stand out the most when a reader is experiencing your world for the first time. Take your story seriously. Create a world with consistent time, and make sure the hours pass at a realistic rate. If you’re writing a science-fiction or fantasy novel and time passes differently in your world, let your reader know. But make sure you stick to that new law of nature and make it believable. If you have a huge event coming up in three days’ time, don’t write only one days’ worth of plot and then have day three pop up out of nowhere. You have to follow your own rules before you can expect your reader to accept them.

One of the most important aspects of successful storytelling is consistency. The best way to make sure your story is just that, is to write a solid background—whether in paragraph or list form, whether you draw your characters or find pictures to describe on Google, find a point of reference and return to it when needed. Follow this advice, and I can guarantee your story will be much more enjoyable.

Jessica Victoria Fisette is the author of The Soul Reaper series, Fragments, and The Aldurian Chronicles. Her hobbies include discovering the benefits of natural medicine, wine tasting, and trying new recipes in the kitchen. She likes to unwind by typing out a scene or two in her latest obsession or indulging in a good book. Having been passionate about writing since she was a little girl, she is constantly coming up with new ideas for future stories and creating unique, strong-willed—albeit flawed—characters to overcome the difficult obstacles she places before them. Having spent all her life in rural Southeast Texas, she appreciates the tranquility of country living and hopes to implement such a love for nature into her beautiful, ever-so-curious little girl.

You can follow her by clicking the links below.